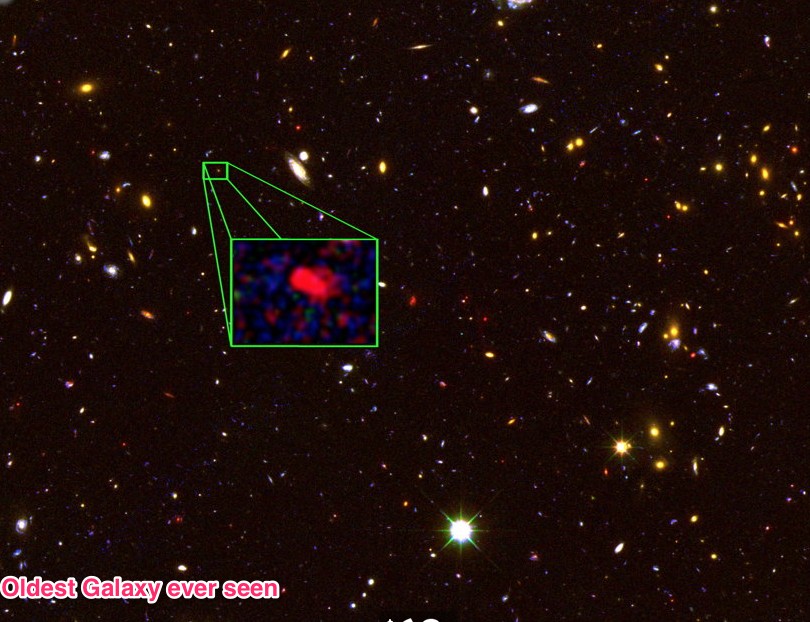 Take a look at Creation! or at least the closest thing to it we’ve so far observed. We see this highlighted galaxy (box) “only” 700 million years after the Big Bang. This picture of the most distant galaxy known is a result, in part, of the Hubbell Telescope enabling us to see, not how that galaxy looks now, but as it looked 13.1 billion years ago!  (Ancient Galaxy z8_GND_5296 Is Farthest Ever Seen | Space.com)

“Where were you when I laid the earth’s foundations?” the Lord asks Job (38:4). “Do you know who fixed its dimensions or measured it with a line?” (v. 5) As a response to Job’s plea for answers to his overwhelming grief, that seems a bit off point. Job complained incessantly about his need of an audience with God in order for God to set the record straight–Job is innocent of any wrongdoing. Or, if he is guilty, specify the charges! Instead, Job first gets silence, then this blast of seemingly irrelevant questions.

Based on the theory that righteousness always brings material prosperity, true as it seemed for so long, it is Job’s demand for justice that begs the point. The Universe (Chapter 38) and the Animals (Chapter 39), in fact, live a life of their own–apart from humans. No such rigid law of retribution exists. Job’s anguish moves us deeply, but his demand for God to give account to him reverses roles: Job determines what is “just.” The Lord instead, while listening without condemnation or accusation of  sin, maintains his sovereignty.

So many times, we believe God/Life/Society has wronged us, especially when we have done no wrong. When you feel wronged, what do you do?