Belleville, Illinois, resident James Hodgkinson left for Washington D.C. several weeks ago in order to “fix the tax system,” according to his wife Suzanne. Before leaving, he sold all his belongings, she reported. Political activist Hodgkinson then shocked our nation Wednesday morning with his rifle assault on Republican congressmen practicing for a baseball game against Democrat congressional opponents. He struck Steve Scalise (La) and four others. The ten-foot high chicken wire fence enclosing Scalise and the many others practicing for an annual Republican vs. Democrat lawmaker baseball game on Thursday, created extreme vulnerability. Two armed security detail accompanying Republican Majority Whip (vote counter) for the House of Representatives, Steve Scalise, saved many lives. “Without Capitol Hill police, it would have been a massacre—we had no defense—we had no defense at all,” Sen. Rand Paul, R-Ky., said on “Fox & Friends.” “We were like sitting ducks.” Only Scalise’s two-man security detail in civilian clothes, prevented that massacre. As I write, Scalise, though somewhat improved, remains in critical condition from gunshot wounds to his hip area. A fellow representative and surgeon reported he could see the entry wound, but not the exit wound. The bullet hit Scalise in one hip, shattered into 100 pieces and continued through his body to the other hip area, affecting  many important internal organs. Doctors admitted that, when brought to the hospital, he was at risk of imminent death. He has undergone several operations already and his condition has improved. As of this writing, however, he remains in critical condition. We join his family, congressional colleagues, and our nation in prayer for his speedy recovery.

The attack didn’t come from nowhere. A comedienne’s “joke” of holding a mock severed head of our president, as well as nightly Central Park, NY, performances of “Shakespeare in The Park,” which depicted the assassination of Julius Caesar as a figure made to look like President Trump led up to this crisis of actual violence. The FBI reports that Hodgkinson had a list of Republican lawmakers on his person.

Although some on both sides of the political aisle point accusing fingers at the other side, many others have begun to call for calm, tolerance of dissent, and a non-violent response. “An attack on one of us is an attack on all of us,” Speaker Paul Ryan said in his address to congressional members. Let’s also pray that our citizens will heed these calls for national unity, including one from President Trump played on the Jumbotron at the game. Leaders of both parties need to work overtime to ratchet back the extreme rhetoric. If our democratic principle of self-government is to survive, they also need to work diligently to re-establish the civil society.

The next day, lawmakers played the scheduled game with a record crowd for this event: 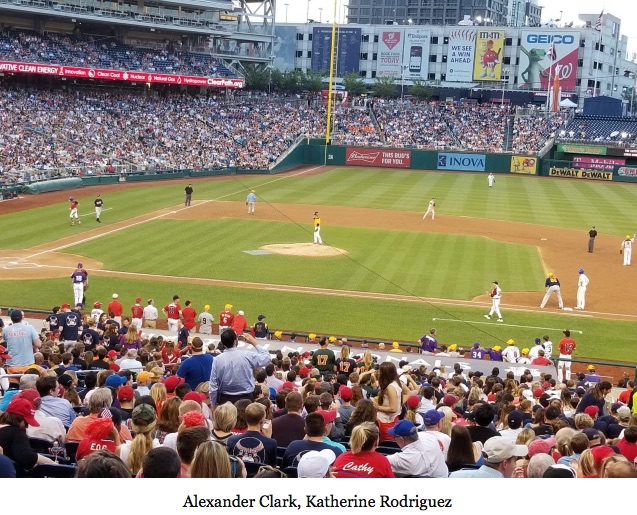 Pray that God works in us to maintain our sense of unity.