What Words Do You Say To A Grieving Friend? 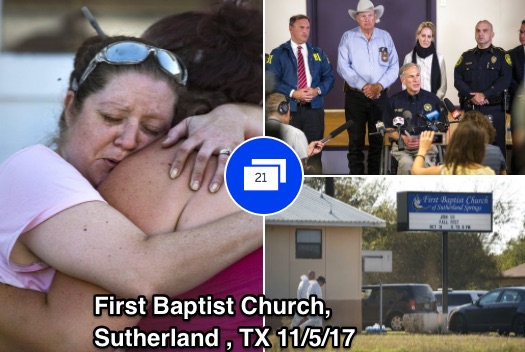 On Sunday, November 5, 2017, Patrick Devin Kelley walked into Sutherland Springs Baptist Church (TX) during worship, and, and with an AR-15 rifle, killed 26. A neighbor, hearing gunfire, returned with a rifle, wounded Kelly twice, and forced him to flee. Ten minutes later, Kelley took his own life. This event holds the dubious distinction of having been our worst church shooting in American history.

There had been numerous warning signs of violence: the Air Force court-marshalled Kelley for beating his ex-wife and stepson. He also faced charges of cruelty to animals, was institutionalized for mental illness, and threatened members of his family. He recently collided with a car driven by a 91-year old women who pulled out in front of his motorcycle. That left him with intense headaches.

There were also numerous failures. Five years ago, Kelley escaped from a mental health facility. When El Paso, TX, officers interviewed him afterward, their information included that he was  a danger to himself and others, and that he was facing military criminal charges. Not only had he been court-marshalled for domestic abuse that same year, and given a dishonorable discharge, but the Air Force acknowledged that it did not tell federal authorities about the conviction for domestic violence.  That should have prevented his access to buying weapons. They also did not reveal  Kelley’s stay in a mental health facility and his having threatened his superiors.

What Do You Say?

We’ve seen enough detail to learn the enormity of the tragedy which has befallen our country, the families involved, including Kelley’s, but also the body of Christ. Pastor Frank Pomeroy and his wife Sherri, who were traveling elsewhere at the time,  lost not only 26 parishioners, but their 14-year old daughter Annabelle. “What do you tell the other grieving families?” a reporter asked him. “I’m still working on that,” pastor Pomeroy gently responded, then added, “but thank you.” Unwilling to focus only on their personal loss, the Pomeroy’s instead focused on the loss to their church family, to the body of Christ. “We lost more than Belle yesterday,” said Sherri, “And one thing that gives me a sliver of encouragement is the fact that Belle was surrounded yesterday by her church family that she loved fiercely and vice versa.”

When Job’s friends learned of the enormity of his losses, they met visited, and for a week remained silent (Job 2:11-13). Anyone who attempts to offer consolation to someone in tragedy waits until they know how best to respond. That’s why Pastor Pomeroy responded as he did. Consolation consists in more than what we say. On behalf of the Southern Baptist Convention of Texas, The North American Mission Board, for example, offered to pay the funeral expenses of those who died.

How have comforters responded to you in your grief? If you were to offer comforters a piece of advice as to what helps, what would you tell them? As to what doesn’t?

Gordon Grose loves most to write, speak, and preach on the message of hope from the book of Job. Using drama, video, and PowerPoint, he has preached and presented this message of hope to churches around the country. Grose pastored three congregations 25 years, then served 12 years as a pastoral counselor in a Portland, Oregon counseling clinic. He now serves with Good Samaritan Counseling Services, Beaverton, OR. A graduate of Wheaton College (IL), Gordon-Conwell Theological Seminary, Brandeis University, and Boston University, he comes from a rich and varied background in theological and counseling training. In 2015, Gordon published Tragedy Transformed: How Job's Recovery Can Provide Hope For Yours, a book about turning to Job for hope after tragedy. If you have experienced life challenges or personal tragedy, visit his Transforming Tragedy (gordongrose.com) blog to learn more. TragedyTransformed.com provides a sample of Gordon's speaking as well as an opportunity to purchase copies of his book.
View all posts by Gordon Grose →
This entry was posted in Death and Dying, The Counselor, The Sufferer. Bookmark the permalink.