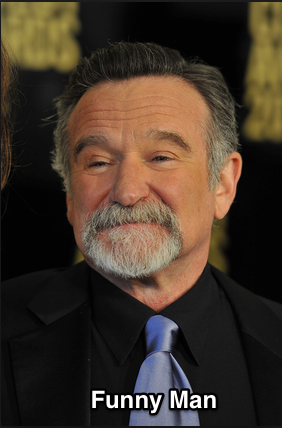 Robin Williams (1951-2014) was our Funny Man. Through his TV series, movies, stand-up comedy, and personal interactions, he loved to make us laugh.  We mourn the loss of a cultural ikon who loved, more than anything else, to double over in mirth. That was, in fact, more important to him than what he felt inside.

Although Robin could make us laugh, as he did in The Birdcage, and move us in his Oscar-willing performance in Good Will Hunting, he kept his feelings private. “He’s genuinely, genuinely one of those guys, such a high energy, we would never figure out anything. He would never let anybody get inside to know what was going on,” said Jamie Masada, who founded Laugh Factory and Williams’ long-time friend. “They don’t want to talk about their problems. They always want to make people laugh.” Inside, there was a lot going on.

Williams’ intensity in humor, even compulsivity about making people laugh, masked a life-long addiction to cocaine and alcohol. “Cocaine was for me a place to hide,” he said. “Most people get hyper on coke. It slowed me down,” he told People in 1968. In 2006 he went back into treatment for alcohol. John Belushi’s death sobered him, along with his wife’s pregnancy with Zak, causing him to quit cold turkey. After two decades of sobriety, Williams again sought treatment in 2006. He hadn’t faced the underlying causes, or his addiction, he told the New York Times. “The one thing I hadn’t dealt with,” he said, was the “voice in the background: ‘Psst! How honest do you want to live?'” Zak, it seems, gave his dad an ultimatum, which led to his entering that treatment in Oregon in 2006. “You’re straining at a precipice,” said Williams, “and you look down, and there’s a quiet little voice that goes ‘Jump.'” But in 2013, he told Parade about that voice again, that “Lower Power,” as he called it. In a store, he saw a small bottle of Jack Daniel’s. “Hey, just a taste. Just one. I drank it, and then there was that brief moment of ‘Oh I’m okay!’ But it escalated so quickly . . . I knew it was really bad one Thanksgiving when I was so drunk they had to take me upstairs.” Mel Gibson’s public missteps took the pressure off Williams, but also served as a wake-up call for him to get help again.

Williams was with John Belushi when, after an all-night binge on cocaine and heroin, Belushi died of an overdose. Two other friends in his world of entertainment also died young: Christopher Reeve (Superman) and Andy Kaufman. Their deaths led to survivor’s guilt. “Robin outlived them all. He was a sensitive soul who struggled with the unfairness of it all,” someone close to the family reported.

Robin’s superb talent created enormous expectations; could he live up to them? “Robin was very depressed,” someone in a position to know said. “His TV series got cancelled, his last film ‘The Angriest Man in Brooklyn’ hardly opened. He was in a funk.” The comedy “Boulevard,” in which Williams starred, had not found a distributor.

In March 2009, Williams’ heart problems led to his hospitalization and postponement of his one-man comedy tour. That resulted in replacement of his aortic valve. Although people often have difficulty empathizing with celebrities with serious problems (“So what? You’re famous!”), Robin let his audience know of his appreciation. “I’m feeling much better now,” he said at his first public appearance in 2009 after that heart surgery. “And thank you very much for asking. It’s nice to know people care.”

The most recent medical report comes from his wife after his death. He hadn’t yet shared publicly his recent diagnosis for Parkinson’s Disease. “Robin spent so much of his life helping others. Whether he was entertaining millions on stage, film or television, our troops on the front lines, or comforting a sick child – Robin wanted us to laugh and to feel less afraid,” his wife Susan Schneider said in a statement. “Robin’s sobriety was intact and he was brave as he struggled with his own battles of depression, anxiety as well as early stages of Parkinson’s Disease, which he was not yet ready to share publicly. It is our hope in the wake of Robin’s tragic passing, that others will find the strength to seek the care and support they need to treat whatever battles they are facing so they may feel less afraid.”

Lessons from Our Funny Man

Is there something important you need to share with those closest to you?