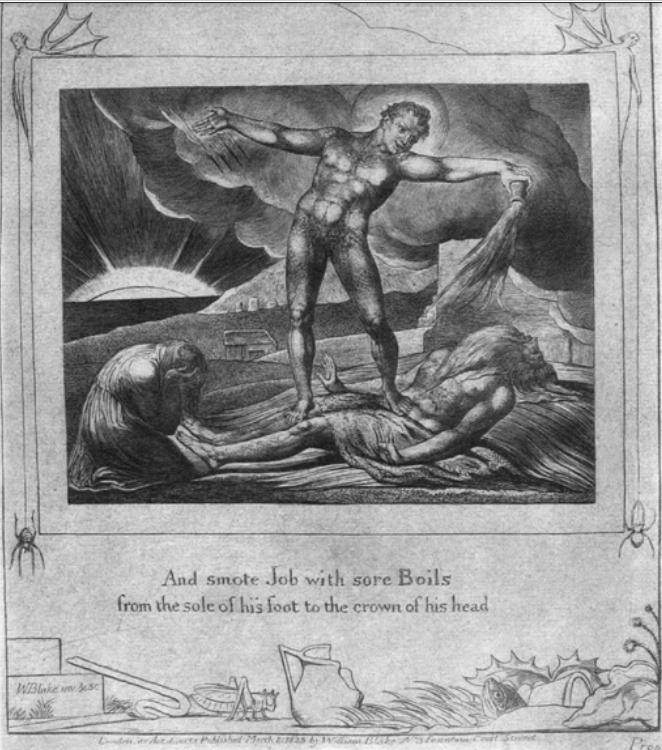 A member of a class I taught recently heard a broadcast discussion of Job. One atheist participant, among his other arguments against the book, raised the question of why God permitted such a cruel test of Job.

The Lord tells the Satan, (always “the” in the book of Job to stress his role as prosecutor, as against a proper name), “See, all that he has is in your power; only do not lay a hand on him,” (1:12) and “See, he is in your power; only spare his life” (2:6). In chapter 1, Job loses his businesses, employees, and wealth; in chapter 2 he also loses his health (pictured above; see discussion below). What kind of God allows a faithful servant to undergo such crushing losses? Is God weak, playing games, or just plain sadistic?

For many, like the atheist above, Job’s unjust suffering disqualifies belief in a sovereign, benevolent deity. But even believers can question. At first Job himself doesn’t doubt God’s goodness (see 1:20-22; 2:10). But by Chapter three, Job’s incessant question, “Why?” rings out five times:  verses 11, 12, 16, 23 (unstated), and 26. In Job’s case, his Why? refers to his having to live with suffering rather than die in peace.

David J. A. Clines, Old Testament scholar and author of a three-volume commentary on the Book of Job, helped me with some thoughts on this passage. The issue to be tested is the relationship between piety and prosperity. The narrator presents Job as pious: “blameless and upright; he feared God and shunned evil” (1:1); Job also  prospers, “wealthier than anyone in the East” (1:3).

Well, are the two qualities related? Or not? Is Job pious because of his material blessing? Now that the narrator has introduced Job this way, we can’t not think about that question, can we? This issue demands a way to determine whether or not piety and prosperity are linked. And, if so, how.

From Then to Now

Now we’re no longer talking about Job, one solitary ancient person; we’re talking about us. Is our devotion to God related to our prosperity? How will we know? We could start with a poor pious man and add wealth. Will we then succumb to the temptation of materialism and leave behind our piety (the temptation of people in the First World, including us in the USA)? Or we can start with a wealthy pious man and remove his wealth and children: will we “curse” God to his face, as the Satan warned Job would (1:11; 2:5).

The Book of Job, of course, chooses the second alternative. The story proceeds. What will Job do? Reading the whole book carefully reveals his faithfulness is not all that evident. Beginning in Chapter three, when he finally begins to speak after a seven-day silence, not surprisingly, he opens with a curse! You’ll have to read the book to discover whether or not he curses God. The author describes Job’s very human struggle with depression and other emotional difficulties as he works out his faith in the midst of suffering.

Where do you fit with Job’s test? Is this just an academic exercise, or has God tested you? What was the nature of that test? The outcome?

“Job is here represented lying on the ground, while Satan stands on him, pouring fire from a phial, smiting him with sore boils. At the feet of Job, kneels his wife, burying her face in her hands. On the left the sun, with flashing rays, sinks gloomily behind a black sea. The circle of shaded light behind the head of Satan deserves notice, apparently symbolizing, as in the other plates where it occurs, the fact, that to him, for the time, the power of the Lord had been committed to persecute Job: “Behold he is in thy hand, but save his life.” Note also the symbolism of the design around the central piece,—the pitcher broken at the fountain, the grasshopper that is a burden, the broken crook, the croaking frog in slime and weeds, the bat-winged angels each holding a thread from which a poisonous spider depends.”

This material is put online to further the educational goals of Liberty Fund, Inc. This material may be used freely for educational and academic purposes. It may not be used in any way for profit.]

Gordon Grose loves most to write, speak, and preach on the message of hope from the book of Job. Using drama, video, and PowerPoint, he has preached and presented this message of hope to churches around the country. Grose pastored three congregations 25 years, then served 12 years as a pastoral counselor in a Portland, Oregon counseling clinic. He now serves with Good Samaritan Counseling Services, Beaverton, OR. A graduate of Wheaton College (IL), Gordon-Conwell Theological Seminary, Brandeis University, and Boston University, he comes from a rich and varied background in theological and counseling training. In 2015, Gordon published Tragedy Transformed: How Job's Recovery Can Provide Hope For Yours, a book about turning to Job for hope after tragedy. If you have experienced life challenges or personal tragedy, visit his Transforming Tragedy (gordongrose.com) blog to learn more. TragedyTransformed.com provides a sample of Gordon's speaking as well as an opportunity to purchase copies of his book.
View all posts by Gordon Grose →
This entry was posted in Friend of Job, The Doubter. Bookmark the permalink.