How A Disaster Shows Who We Are 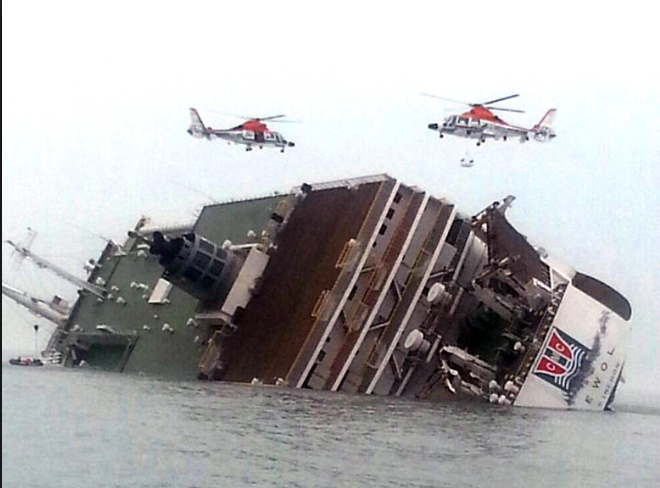 Two months ago the South Korean ferry Sewol capsized with hundreds of high school students aboard. Mesmerized, the nation watched the drama on live TV 24/7. In a culture which shares everything, Koreans shared their mutual loss and grief, depression, shame and outrage. “It’s not only the victims and their families, but a majority of the general public is suffering from mental shock, sadness, rage, and feeling of helplessness,” wrote an editor of a Seoul newspaper. “In, short, its not an exaggeration to say that this entire nation is going through post traumatic stress disorder.”

Viewers had difficulty dragging themselves away from their TV. Officials cancelled all entertainment programs of music, comedy, or drama. They also delayed fashion shows, sporting and cultural events. Movie attendance declined 40 percent. Very little could erase the haunting images of their dear children in cabins slowly filling with cold water. “I still cry for them,” said Yong-sub Choi, VP of value, culture, and media for an investment firm.

Beyond Grief and Loss

There was more anguish. Accused of “murderous” acts by the President of South Korea, eleven crew members, along with the captain, were arrested. Families fell prey to a hoax  from a woman, saying she was a diver, who claimed to have received texts from their child, trapped, but still alive. One picture showed a government official eating ramen in a chair while families sat on the floor. Another ministry of security and public administration official posed for a self-serving photo in front of the list of the dead at the gym where survivor families had congregated. At first the official was suspended, then allowed to resign.

This tragedy has led to much soul-searching. “A nation’s standards and capability is tested when disaster and crisis come by,” said another editorial, this one on social networks. “Our country’s level is a failing grade of a third-class country.” “As a father, this burden is deep,” Choi reflected. “I feel responsible for the deaths of those innocent young kids. Our generation have marched forward only looking ahead. It was all economic growth and wealth. We neglected to take effort to mature ethically.”

A disaster made worse by unethical decisions of ferry crew highlights the shoddy values which crept into the people responsible. It often takes a financial, economic, or cultural disaster to bring to light where we are–and who we’ve become. No one will minimize the grief and even shame the Korean people feel, but we all can learn how the values of success or of looking good, or of economic prosperity can weaken our moral fiber. Witness our so-called “housing bubble.”

Witness Job also, who faced repeated disasters that revealed his true character. No one wishes such pain on others, but we all know such disasters do happen. Some can be avoided, some cannot. In any case, how we respond reveals who we are.

Gordon Grose loves most to write, speak, and preach on the message of hope from the book of Job. Using drama, video, and PowerPoint, he has preached and presented this message of hope to churches around the country. Grose pastored three congregations 25 years, then served 12 years as a pastoral counselor in a Portland, Oregon counseling clinic. He now serves with Good Samaritan Counseling Services, Beaverton, OR. A graduate of Wheaton College (IL), Gordon-Conwell Theological Seminary, Brandeis University, and Boston University, he comes from a rich and varied background in theological and counseling training. In 2015, Gordon published Tragedy Transformed: How Job's Recovery Can Provide Hope For Yours, a book about turning to Job for hope after tragedy. If you have experienced life challenges or personal tragedy, visit his Transforming Tragedy (gordongrose.com) blog to learn more. TragedyTransformed.com provides a sample of Gordon's speaking as well as an opportunity to purchase copies of his book.
View all posts by Gordon Grose →
This entry was posted in Death and Dying, Friend of Job, The Sufferer. Bookmark the permalink.