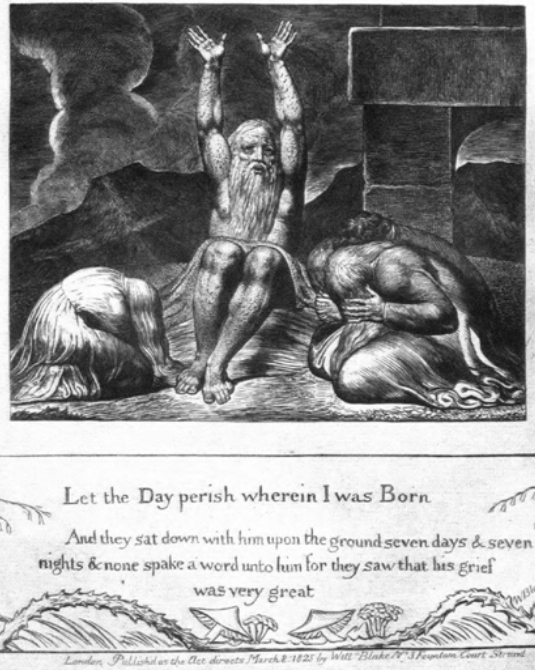 At his lowest point, Job pleads with God to die. When his three friends hear of his tragedies,  they meet together and come to him to console him.  With their sitting with Job in his grief for a week, Job’s friend begin well enough.

It’s when they speak in response to Job’s death-pleas that they stumble–or do they? We rightly criticize Job’s friends’ responses to Job’s suffering as insensitive, dogmatic, and theological. All Job needs is for them to understand, but they never do. Eliphaz stresses his personal experience; Bildad focuses Job on the traditions of the ancestors; Zophar sees in Job’s sufferings God’s grace in that Job gets only half of what he deserves. With friends like that, we say, who needs enemies?

But there’s another, less recognized, side to the role of Job’s friends– their social support. In their responses to Job, as we learn from Jack Kahn (Job’s Illness), they allow him to respond to each of them individually after each of them spoke. That is unusual in a group setting. Usually, two or three speakers will confront a colleague in an effort to “get through” their defenses before the person is allowed to speak in rebuttal or self-defense. That’s modern group process. But Job answers each in turn. This give Job enormous position in the group and enhances his self-esteem.

Even when they fall silent by Chapter twenty-eight, and through the several ensuing monologues: Wisdom, Elihu, The Lord, they remain in the picture until the very end (Chapter 42). In fact, I would be remiss not to note his wife’s similar presence.

In tragedy, with possible depression, how important is social support? I think we can make the case that Job survives his self-destructive impulse because his friends and wife never leave him alone. They operated on different planes, they seemed never to communicate, in fact, never to listen to him, but, in the human sense, his friends saved Job’s life.

If you are going through deep waters right now, who do you have to lean on? Where would you look to find social support to help you through your crisis?

Gordon Grose loves most to write, speak, and preach on the message of hope from the book of Job. Using drama, video, and PowerPoint, he has preached and presented this message of hope to churches around the country. Grose pastored three congregations 25 years, then served 12 years as a pastoral counselor in a Portland, Oregon counseling clinic. He now serves with Good Samaritan Counseling Services, Beaverton, OR. A graduate of Wheaton College (IL), Gordon-Conwell Theological Seminary, Brandeis University, and Boston University, he comes from a rich and varied background in theological and counseling training. In 2015, Gordon published Tragedy Transformed: How Job's Recovery Can Provide Hope For Yours, a book about turning to Job for hope after tragedy. If you have experienced life challenges or personal tragedy, visit his Transforming Tragedy (gordongrose.com) blog to learn more. TragedyTransformed.com provides a sample of Gordon's speaking as well as an opportunity to purchase copies of his book.
View all posts by Gordon Grose →
This entry was posted in Friend of Job, The Counselor. Bookmark the permalink.