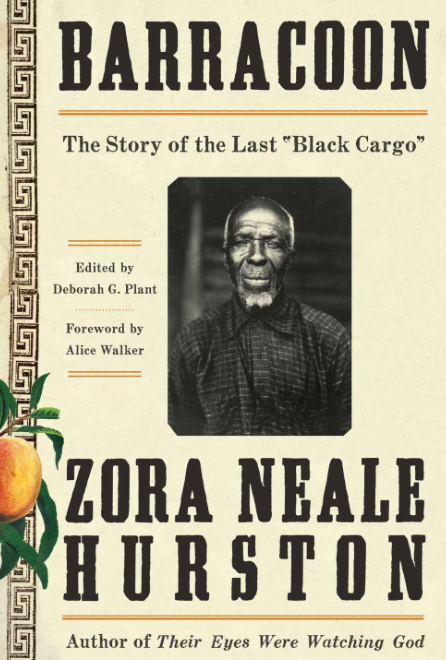 I cannot underestimate the importance of this slim volume (171 pages, from the Foreword by Alice Walker to the end of the Bibliography). This previously published (in scholarly journals) account of an important facet of the American experience takes its place among other significant works on American slavery. By recording the first-hand story of “Cudjo Lewis” (his American name; named Cudjo because of his birth on a Monday, Lewis a anglicizing of Oluale, his father’s name), a survivor of the Clotilda,last known “slaver” bound from West Africa to Mobile, AL, in March 1860, Hurston has made a significant contribution to our history. After the United States outlawed the “Illegitimate Trade” it continued to make its owners so much money that some few risked the run with their human cargo. The Clotildaescaped capture, but after its one-and-only run, its co-owner/captain William foster scuttled the ship to cover his piracy.

Author Hurston died in 1960, but in 1973 Walker purchased and engraved a stone to mark Hurston’s grave: “A Genius Of The South.” Hurston wrote four novels, (most notably, Their Eyes Were On God), folklore, an autobiography, and over 50 short stories, essays, and plays. She attended Howard University, graduated Barnard College in 1927, and attended Columbia University. Born January 7, 1891, she grew up in Eatonville, FL, and died in Fort Pierce, FL, in 1960.

19-year-old Kossula, whose name means, “I do not lose my fruits anymore (i.e. my children do not die anymore,” part of the Isha subgroup of the Yoruba, in the midst of his initiation for marriage, awoke to the predawn slaughter of his dazed townspeople by rival Dahomey women warriors. Well-paid by slave traders, the Dahomey found a rich reward in capturing and selling slaves. The bloodthirsty horror Cudjo witnessed, the loss of his family and townspeople, and the indignity of being chained with others to be marched to the sea traumatized him. But so did being held in a Barracoon (Sp. “barracks”), a stockade for holding slaves until they could be sold. Now caught between the two worlds of West Africa and the United States, he belonged to neither.