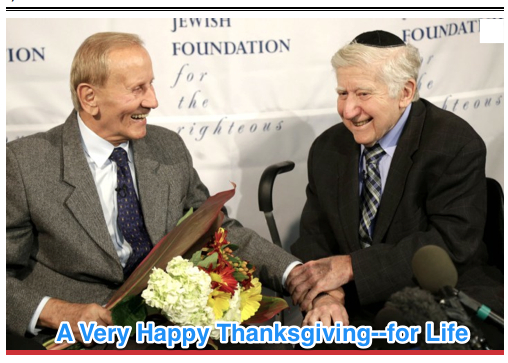 How do you thank someone for life? This 70-year tale of danger, courage, and trust brought together two men in their 70’s this week. They met at New York John F. Kennedy Airport to give and receive thanks for the gift of life. Maybe you saw their picture and moved on; maybe you missed the moment entirely. I want you to remember it.

The Jewish Foundation for the Righteous, which publicizes non-Jews who risked their lives to save Jewish victims of the Holocaust, sponsored the visit of Czeslaw Polsiec, 80, from his native Poland to meet Leon Gersten, 79. That is, on the day beginning Hanukkah, when the Jewish community gives thanks for the cleansing of the Temple under the Maccabeans, to meet again.

As a boy of 8, the New York psychologist survived Nazi persecution along with his family, when Polsiec, then 10, and his family kept Gersten and his family in their attic and, at times, hidden in their grain cellar.

“We never forgot the fact that you and your parents are the ones who saved our lives. The only reason we are alive is because of you and your family,” said Gersten through Polsiec’s tearful interpreter as he relayed that sentence. “I am very happy, after 69 years in Poland, finally meeting my friend, ” Polsiec replied. “We lived in terrible circumstances. Poland was occupied and [the Nazis] … were killing the Jews.”

With five children, 34 grandchildren and nine great grandkids — lives made possible by the courage of Polziec’s family, Gersten felt a sense of victory. “This is why our gratitude is so great, because of them. These generations are growing up,” Gersten said. “The Germans did not succeed, and this was our triumph.”

All of us can feel thankful that Nazi tyranny failed. As you reflect on Thanksgiving 2013, what gives you the most cause to be thankful?

Gordon Grose loves most to write, speak, and preach on the message of hope from the book of Job. Using drama, video, and PowerPoint, he has preached and presented this message of hope to churches around the country. Grose pastored three congregations 25 years, then served 12 years as a pastoral counselor in a Portland, Oregon counseling clinic. He now serves with Good Samaritan Counseling Services, Beaverton, OR. A graduate of Wheaton College (IL), Gordon-Conwell Theological Seminary, Brandeis University, and Boston University, he comes from a rich and varied background in theological and counseling training. In 2015, Gordon published Tragedy Transformed: How Job's Recovery Can Provide Hope For Yours, a book about turning to Job for hope after tragedy. If you have experienced life challenges or personal tragedy, visit his Transforming Tragedy (gordongrose.com) blog to learn more. TragedyTransformed.com provides a sample of Gordon's speaking as well as an opportunity to purchase copies of his book.
View all posts by Gordon Grose →
This entry was posted in Holidays. Bookmark the permalink.