The Sight of Misfortune 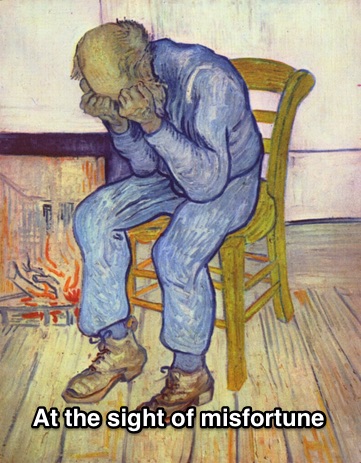 Today I lunched with a friend, who described himself as someone with “a strong diagnosis.” He meant his diagnosis of mental illness.  To calm his symptoms in stress, for example, his service dog remains by his side–day and night. People he encounters walking express curiosity. “Every time someone asks me about the dog,” he says, “I have to make a decision about how much to tell them.” The reason: “People back off,” he said, “when they learn I have a mental illness.” My friend works in a responsible job. He has learned, sometimes with his dog’s help, to manage his symptoms.

Desperate for acceptance, people with serious diagnoses reach out to others, sometimes with similar diagnoses, sometimes with other diagnoses. But beyond the misfortune of having a mental disorder, what they share is shame. Shame for having limitations on their capacity to think, feel, and act as others do. The withdrawal of others makes their suffering worse.

“At the sight of misfortune,” says Job to his well-meaning wisdom colleagues,”you take fright” (6:21b). Job’s physical appearance at first awakens their compassion: “When they saw him from a distance, they could not recognize him, and they broke into loud weeping; each one tore his robe and threw dust into the air onto his head” (2:12). They remain silent for a full week, waiting for Job to speak, “for they saw how very great was his suffering” (2:13).

After Job explodes with a wish to die in chapter 3, however, evidence of a severely depressed mood, Job’s friends back away emotionally. To them, Job’s utterances reveal something not right–with him. Job accuses them of being fair-weather friends (6:14), whose friendship is fickle (6:15), like a wadi [a desert stream bed] previously coursing with water, but now dry (6:16-19). “[Weary desert travelers] are disappointed in their hopes,” he says (6:20b).

Then Job applies his image to his friends. “At the sight of misfortune,” he tells them, “you take fright” (6:21b). The sight of someone handicapped physically stirs that same response in me. Usually, I feel relieved if they don’t need my help. I feel embarrassed for their misfortune. Recognizing that such a response is normal enables us to overcome it and to take the next step of appropriately reaching out in normal interaction, as we would to anyone.

How do you respond?

At the sight of misfortune, what’s your response? Do you take fright? Recoil in horror? Or extend yourself in friendship?