Tragedy, Prayer, and A Vow 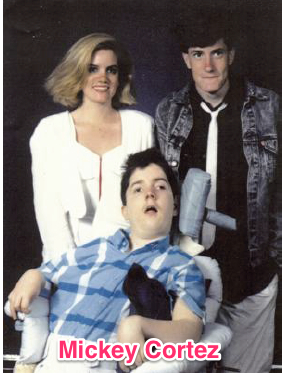 In March 1982, Mickey Cortez nearly died. Seven years old, the victim of a drunk driver, Mickey landed on life-support in a hospital, the third his father Paul visited that night. Two other hospitals held other members of Paul’s family injured in the crash, which took the life of his wife’s sister-in-law and her two children as well as of his own son Duke. There were so many survivors (his wife, brother-in-law, two other sons, and his daughter), no one hospital could treat them all. The family had planned to meet Paul to take a trip to San Diego. Instead, someone called Paul to instruct him to go to a hospital.

Doctors didn’t expect Mickey, the most injured, to survive the night. Not knowing what else to do, Mickey’s father took a step of faith. “So I prayed,” he said, his voice cracking with emotion. “I prayed to God to walk our families through this, to help us. And he did.”

“If Mickey survives,” Paul told God, “no matter the condition, my family and I will always be there for him.” In spite of his life in a persistent vegetative state, Paul and the family gave Mickey trips cross-country and to Disneyland. He attended every football game his brother Tony played. Paul took Austin Miguel (always known as Mickey) with him to schools to speak on the dangers of drunk driving. They also attended a national conference of Mothers Against Drunk Driving (MADD).

Dr. Paul Vespa, head of UCLA’s Neurointensive Care Unit, says some cases where people largely in a vegetative state seem to have some recognition.”There are people who are in what’s called a minimally conscious state,”said Vespa. “They have a lot of impairment, but they are able to interact a little bit.” Giving them as close to normal a life experience as possible, as Mikey’s family did, probably does help them, he added.

Mickey responded visibly when his favorite uncle or his brother’s children visited. By 1984 he recovered enough to have the breathing tube removed, and he learned to swallow again, so his feeding tube could be removed.

Predictions regarding Mickey’s living stretched from that first night to a few days, to a couple of months, then to three-to-five years. “Who knows?” doctors said, finally. In his mid-30’s he contracted pneumonia. Just after his 38th birthday, he was diagnosed with end stage renal failure. Rather than go elsewhere,  the family learned to give him dialysis at home.

Mickey gathered with the rest of the family for a portrait on Christmas Eve last December. Two days later, one day before his 39th birthday, Mickey died.

The Impact of Mickey’s Life

A year ago, when Paul gave a talk about drunk driving, a young woman told him she had been one of Mikey’s first-grade classmates. She let him know that over the years she and others had gotten the message.

“And I just held on to her and we cried,” Paul said.

In spite of a dire personal tragedy, Paul and the family’s faith in God, as well as their commitment to Mickey, helped him enjoy life as a gift. It also influenced others for good. How has your faith affected your response to a personal or family tragedy? Have you ever made a vow? Have you seen someone transform a tragedy onto good?

[Sources: http://news.yahoo.com/family-promise-gave-life-man-31-coma-152453050.html?soc_src=copy  Photo: The undated picture above shows Mickey with his sister Angelica and his brother.]

Gordon Grose loves most to write, speak, and preach on the message of hope from the book of Job. Using drama, video, and PowerPoint, he has preached and presented this message of hope to churches around the country. Grose pastored three congregations 25 years, then served 12 years as a pastoral counselor in a Portland, Oregon counseling clinic. He now serves with Good Samaritan Counseling Services, Beaverton, OR. A graduate of Wheaton College (IL), Gordon-Conwell Theological Seminary, Brandeis University, and Boston University, he comes from a rich and varied background in theological and counseling training. In 2015, Gordon published Tragedy Transformed: How Job's Recovery Can Provide Hope For Yours, a book about turning to Job for hope after tragedy. If you have experienced life challenges or personal tragedy, visit his Transforming Tragedy (gordongrose.com) blog to learn more. TragedyTransformed.com provides a sample of Gordon's speaking as well as an opportunity to purchase copies of his book.
View all posts by Gordon Grose →
This entry was posted in Death and Dying, Friend of Job, Hope for the Hurting, Recovery. Bookmark the permalink.