Playing Hymns Aboard The Sinking Titanic 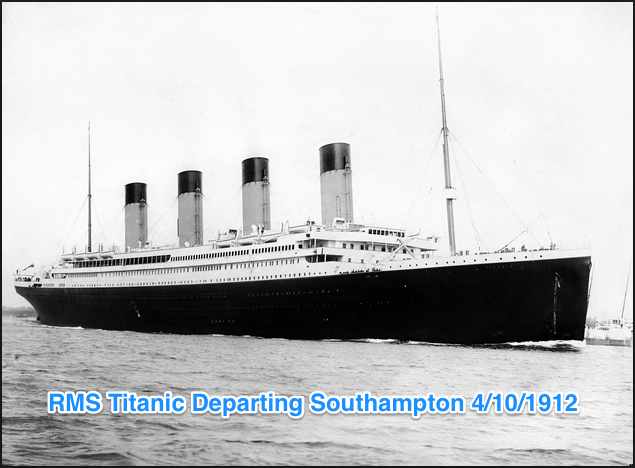 The Titanic, a British steamer of the White Star line, leaves on its maiden voyage across the Atlantic. Spanning 882.5 feet, its tonnage over 46,000, it was the largest ship in the world.

“Unsinkable,” said the experts at the time.

“Iceberg ahead!” said the crew. Too late, the collision 1600 miles northeast of its New York City destination ripped a 300-foot gash in the hull. With 2,200 people aboard, the lifeboats had room for only one-half, mostly for women and children. The ship sank in 2 1/2 hours.

Why did the eight musicians aboard keep playing? Had the captain ordered them? In reality, they were employed not by White Star but by a Liverpool music agency. The captain could not have ordered them to play, only recommend. The answer may reside in the faith of Wallace Hartley, the lead musician. He had played on the Mauretania and the Lusitania. He grew up in Colne, Lancashire, England, where his choirmaster father introduced the Methodist congregation to the hymn, Nearer My God To Thee.

Wallace and Maria Robinson, to whom Wallace was engaged, always attended church whenever he landed. After a few trips on the Titanic, they planned to marry.

According to John Carr, who worked with Hartley on the Celtic, Hartley had said, “Music is the biggest weapon for stopping disorder than anything on the earth.”

“He knew the value of the weapon he had,” said Carr, ” and I think he proved his point.”

Hartley made another significant comment to Ellwand Moody, a musician on the Mauretania who had served under Hartley. “I remember one day I asked him what he would do if he were ever on a sinking ship and he replied ‘I don’t think I would do better than play ‘Oh God Our Help in Ages Past’ or ‘Nearer, My God, to Thee’.”

Wallace Hartley knew what he would do in danger. Do we know what we would do in our moment of danger, to us or to loved-ones? Hartley also had his pieces selected. Upon whom would we call in such a time of need?