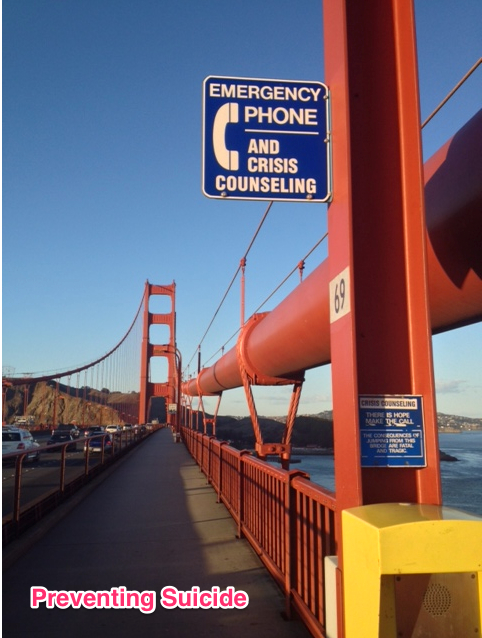 “I was taken aback by one very curious sign,” he said. Posted next to a hotline phone about every 50 yards along the highest span, he found the signs posted here.

“At the time, I was unaware of what you had written on the subject,” he said. He later checked out my website and found my post of 2/28. He also kindly shared his photos with me.

Confronted by those signs brought home to Scott the stark reality of suicide. People who work in the field have important information which can better equip us to help others in crisis.

All of the above statements are false.

1. Talking vs. Acting. Don’t ignore casual or joking comments, like, “I’d be better off dead,” or “I can’t see a way out.” These warnings we need to take seriously.

2. Suicide vs. Insanity. Nor do ideas of suicide necessarily indicate mental illness, at least not insanity or psychosis. Most suicidal people just want the pain to stop. They don’t necessarily want to die; they just can’t see any other way.

3. Hope vs. Hopeless. Suicidal persons waver between wanting life and wanting death until the last moment. The impulse to end their life, though overpowering at times, is temporary.

4. Help vs. No Help. Studies of suicide victims also show more than half tried to reach out to the medical community in the six months prior to their death.

5. Talking vs. Ignoring. Talking about suicide isn’t morbid, but the most helpful step we can take.

Preventing Grief and Loss in Suicide

No one want to be the last one with whom a suicidal person speaks. Our responsibility is to know the warning signs and to be willing to help talk them through this crisis to find help. We start be keeping our facts straight, our heart tender, and our resource list available.

Have you comforted a suicidal person? What tools did you use? Were they receptive to your intervention?

Gordon Grose loves most to write, speak, and preach on the message of hope from the book of Job. Using drama, video, and PowerPoint, he has preached and presented this message of hope to churches around the country. Grose pastored three congregations 25 years, then served 12 years as a pastoral counselor in a Portland, Oregon counseling clinic. He now serves with Good Samaritan Counseling Services, Beaverton, OR. A graduate of Wheaton College (IL), Gordon-Conwell Theological Seminary, Brandeis University, and Boston University, he comes from a rich and varied background in theological and counseling training. In 2015, Gordon published Tragedy Transformed: How Job's Recovery Can Provide Hope For Yours, a book about turning to Job for hope after tragedy. If you have experienced life challenges or personal tragedy, visit his Transforming Tragedy (gordongrose.com) blog to learn more. TragedyTransformed.com provides a sample of Gordon's speaking as well as an opportunity to purchase copies of his book.
View all posts by Gordon Grose →
This entry was posted in Death and Dying, Hope for the Hurting. Bookmark the permalink.