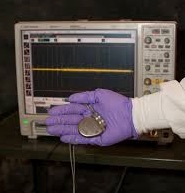 I returned yesterday (6/29/17) from the hospital where I had implanted a cardiac pacemaker. The periodic “pre-syncope” experiences that necessitated this medical procedure included my feeling faint, feeling I’m about to pass out, and, in one case, briefly losing consciousness. One morning I experienced 11 such experiences, including one sitting with my primary care doctor! Over the past few weeks, the heart monitor I wore showed, every now and then, my heart would stop–for up to 5 seconds. “You need a pacemaker,” my cardiologist said, as he called me to schedule the procedure  right away!

When the nurse showed me the device the surgeon would insert into my chest, with two wires as “leads” into the heart chambers themselves, I felt surprised to see how small the device was. I had expected an object the size of a pack of cigarettes, but technology has improved so much that the chip(s) and battery consisted of a relatively thin object a little larger than one inch. The pacemaker makes a brief electrical charge only if the heart fails to do so. After a second where the heart hesitates, the pacemaker restarts the heart, then stops when the heart functions normally again.

As I entered the surgery room, I noticed nurses and doctors wore blue caps of fine netting, as I did. We also all had masks, so I couldn’t see faces. But another man wore a red cap. I figured he must be the surgeon. Later, when I asked about “he with the red cap,” the nurse informed me that he was “Ed, the St. Jude Medical technician.” St. Jude Medical, I learned, manufactured the pacemaker. Seated at a computer, he had been present in the operating room to set up the program for my pacemaker.

After I returned to my room, Ed came by to set up a monitor, allowing my doctor to download data from my pacemaker through the bedside monitor without my needing to come in to the doctor’s office. I quizzed Ed a bit about St. Jude Medical and learned that it and the St. Jude Hospital, although once part of the same corporation, are now totally separate. I mused about how important a business he and his company had. His response touched me: “We mend broken hearts,” he said.

I reflected on the connection between my experience with my physical heart, and with Job’s emotional anguish. I could now diagnose his “trouble” (Chapter 3) also as a “broken heart.” Loss after loss piled up, of businesses, employees, and children, and included,  perhaps most importantly for him, those losses representing the loss of God’s presence (Chapter 29:1ff.). Through the dialogues with his colleagues, we hear his rage against against his life, against his friends, and against God. But perhaps Job spoke from what many people experience, metaphorically, from a broken heart.

What’s your heart’s condition? Do you, like Job, need something to keep it (and you) functioning after a setback, or a series of shocking losses? What is it your heart needs? I invite you to comment on this blog, and any others, to let me know whether and how they help.

Gordon Grose loves most to write, speak, and preach on the message of hope from the book of Job. Using drama, video, and PowerPoint, he has preached and presented this message of hope to churches around the country. Grose pastored three congregations 25 years, then served 12 years as a pastoral counselor in a Portland, Oregon counseling clinic. He now serves with Good Samaritan Counseling Services, Beaverton, OR. A graduate of Wheaton College (IL), Gordon-Conwell Theological Seminary, Brandeis University, and Boston University, he comes from a rich and varied background in theological and counseling training. In 2015, Gordon published Tragedy Transformed: How Job's Recovery Can Provide Hope For Yours, a book about turning to Job for hope after tragedy. If you have experienced life challenges or personal tragedy, visit his Transforming Tragedy (gordongrose.com) blog to learn more. TragedyTransformed.com provides a sample of Gordon's speaking as well as an opportunity to purchase copies of his book.
View all posts by Gordon Grose →
This entry was posted in Friend of Job, Hope for the Hurting, The Sufferer. Bookmark the permalink.