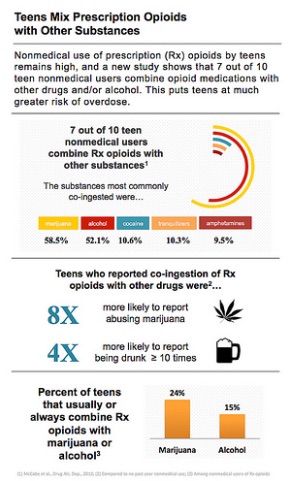 According to a recent study published in the prestigious Journal of the American Medical Association, the yearly rate of poisoning due to opioid overdoses among teens and children from 1997 to 2012  increased 165%. The opioid epidemic has stirred the concern of Washington politicians, including presidential candidate Trump campaigning in New Hampshire. But before leaving office, however, President Barack Obama, also stated, “When you look at the staggering statistics in terms of lives lost, productivity impacted, costs to communities, but most importantly, cost to families from this epidemic of opioids abuse, it has to be something that is right up there at the top of our radar screen.” Obama spoke to the National Prescription Drug Abuse and Heroin Summit in Atlanta, GA in March 2016. “I think the public doesn’t fully appreciate yet the scope of the problem,” he said.

The problem is big enough for adults, but for teens and children? Accidental overdoses of painkillers accounted for most poisonings among children younger than 10, according to Julie Gaither, the study’s lead researcher, a postdoctoral fellow at Yale University. She warned of young children “eating them like candy.” Although accidental overdoses accounted for most poisonings, teens also used these drugs to attempt suicide. In the habit of using other types of drugs to get high, teens use opioids in the same way (see graphic above). “This is largely seen as an adolescent problem or an adult problem,” said Sharon Levy of Boston Children’s Hospital. “But this paper really highlights that this really knows no age boundaries.”

In my reading, here are important solutions experts have offered as a way of dealing with the opioid crisis: comprehensive strategies to target opioid storage, packaging, and misuse.  Target groups at risk for substance abuse and focus on improving family bonds and peer-resistance skills. Physician education on appropriate opioid prescribing, prescription monitoring programs, and campaigns to advise parents of teens to lock up prescription opioid medications and to dispose of old pills. The Substance Abuse and Mental Health Services Administration has endorsed numerous evidence-based programs shown to delay teen substance use and to protect youth into adulthood. The Strengthening Families Program, a skills training intervention for teens and parents, is one such program. This step will require states to invest money to begin.

Boston pediatricians Hagland and Bailey recommend intervention when teens first show indications of addiction. This could help avoid a lifetime of harm. Only one in 12 youth who need treatment for addiction, however, receive it. The reasons: treatment facilities are limited, few pediatricians are trained to treat addiction, and coverage by insurance carriers is also limited. As a nation, the docs say we should expand access and reduce barriers to addiction care for teens. Even when teens find treatment, however, many programs treat them as part of adult programs. Providers, however, should consider the unique developmental needs of youth. Traditional, sometimes punitive, rules of many treatment programs can drive young people away. As a result, youth are only one-third as likely as older persons to remain in treatment.

The doctors also state that effective treatment for teens should incorporate evidence based medications:  buprenorphine, methadone, and naltrexone. Despite the American Academy of Pediatrics recommending that they be offered to youth, only 2 percent of teens in treatment receive one, compared to 26 percent of adults. As federal and state agencies work to expand access to addiction treatment, they should dedicate funding to programs to train providers on best practices to care for addicted teens. Finally, many young people’s caregivers are excluded from the recovery process. But enlisting family support offers a unique opportunity for treatment programs to foster long-term recovery. The Massachusetts Bureau of Substance Abuse Services and other similar agencies have  invested in family-centered treatment programs. Other services should follow their lead.

What information in this blog surprised you? How have you been affected by opiate addiction in your family, in your life? What steps have you taken to get help for others, for yourself? How have the spiritual needs of the addicted person been met?

Gordon Grose loves most to write, speak, and preach on the message of hope from the book of Job. Using drama, video, and PowerPoint, he has preached and presented this message of hope to churches around the country. Grose pastored three congregations 25 years, then served 12 years as a pastoral counselor in a Portland, Oregon counseling clinic. He now serves with Good Samaritan Counseling Services, Beaverton, OR. A graduate of Wheaton College (IL), Gordon-Conwell Theological Seminary, Brandeis University, and Boston University, he comes from a rich and varied background in theological and counseling training. In 2015, Gordon published Tragedy Transformed: How Job's Recovery Can Provide Hope For Yours, a book about turning to Job for hope after tragedy. If you have experienced life challenges or personal tragedy, visit his Transforming Tragedy (gordongrose.com) blog to learn more. TragedyTransformed.com provides a sample of Gordon's speaking as well as an opportunity to purchase copies of his book.
View all posts by Gordon Grose →
This entry was posted in Recovery. Bookmark the permalink.