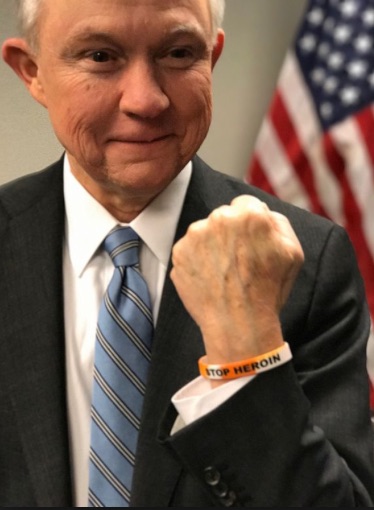 One of my favorite TV programs is Justice TV’s Drugs, Inc., an in-depth look at specific drugs and specific areas of our nation and the world where drugs, including the opioid heroin, are manufactured, transported, distributed, marketed, sold and used. The program interviews users, pushers, cartel members, suppliers (all masked), and law enforcement personnel seeking to stem the flow. According to this program, heroin has become more in demand, the result of graduating from legal and illegal pain prescriptions. Cartel members and other suppliers offer a more pure grade than previously to increase profits. The more pure the heroin, the better able suppliers are to cut it into smaller doses. This enables them to obtain more money from smaller, but a greater numbers of doses, and to provide a better high for their users. Those who experience the best high return to the dealer from which they obtained the “product.”

This week, Attorney General Jeff Sessions called attention to the nearly 60,000 US deaths from opioid overdoses in 2016. He impressed upon lawmakers the need to create an climate in which drug use is shunned or discouraged. “Our current drug epidemic,” he said to the National Alliance For Drug Endangered Children, “is indeed the deadliest in American history. We’ve seen nothing like it.”

“This is not acceptable,” Sessions said. “We must not capitulate, intellectually or morally, to drug use. We must create and foster a culture that’s hostile to drug use.”

Drugs feed an illegal trade worldwide, cost users their livelihood and self-respect, and corrupts society up and down the social spectrum. For a short-term high, users suffer long-term addiction. Withdrawal is almost impossible without the user getting “sick,” a sickness so unpleasant the user will do almost anything to obtain the next fix: beg, steal, or prostitute. One pregnant prostitute interviewed expected the state to take her baby when it is born because it will be addicted to heroin. When gang member encounters a “hopper,” a drug pusher independent of the rival cartel gangs (as described in a recent Drugs, Inc. program “Spring Break,” in Cancun, Mexico), he is beaten. Hoppers benefit by keeping all the profit, without needing to split with a cartel member. But the second time that happens, a special hit man is dispatched to kill him. So add murder to the consequences of the drug trade.

The challenge of Attorney General Sessions to avoid capitulating “morally” means more than words. Drug use fosters moral corruption. In another program, the pusher packaged a drug with candy in order to hook young children. Once started, the users first love the feeling, then they “got to have it” (or get sick); once hooked there’s no giving it up. That may take only one hit. The moral deterioration is relentless. It’s big business.

What can we do? We can educate ourselves, our families, our children and grandchildren. We can foster trust so that, should a family member want to experiment, we learn about it early. We can invite local law enforcement to our schools and community clubs to address the local issues with drugs. If we, or someone we know, is addicted to drugs, alcohol, or sex, go with them to Narcotics Anonymous, Alcoholics Anonymous, or Celebrate Recovery.

Behind the moral crisis lurks the spiritual breakdown of the person, family, and society. Pray for spiritual revival.